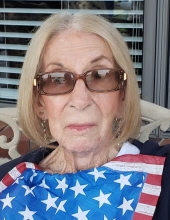 Margaret was born on July 4, 1930 in Belfast, Ireland to her parents, Alfred and Lucille (née Graham) Hall. She was one of the 1.2 million Irish immigrants from 1825 to 1970 who made their way into the United States by way of Canada.

She is the beloved and devoted wife of the late Francis McConkey who affectionately referred to her as, “Sweet Margaret”.

She is also the loving mother of two daughters - Kathleen McConkey and Colleen McConkey-Scannell; proud grandmother of Michael (Nicole) Drake and great-grandmother of Colin and Kacie. She is pre-deceased by her son, the late William F. McConkey;

Sweet Margaret will be laid to rest next to her beloved husband, Francis and cherished son, William at a private graveside service at All Saints Cemetery in Jensen Beach, Florida.
To order memorial trees or send flowers to the family in memory of Margaret Elizabeth McConkey, please visit our flower store.