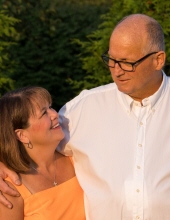 Jim was born to John and Susan Weeks on February 22, 1965, in Harvey, Illinois. He was the “baby” of the family growing up with two older sisters Lynda and Tracey. The family moved to Ypsilanti, Michigan in 1968 where Jim resided for much of his life. Jim was active, fun loving, competitive and had a knack for teasing his sisters. He attended Ypsilanti Public Schools and graduated in 1983 from Ypsilanti High School.

During his childhood years, Jim was involved in both wrestling and football. He continued with wrestling throughout his high school years, and quickly earned the nickname “Killer.” He received many medals throughout his wrestling years, traveling to both local and state competitions.

Jim’s childhood years were filled with family and friends. There were summer days swimming at Chippewa Tennis and Swim Club, Wednesday night picnics on the Chippewa hill, and weekends at “the lake.” He loved waterskiing, jet skiing, wakeboarding, and sailing on the catamaran. He spent time duck hunting with his dad and friends. Sunday night in the Weeks home was “game night” which often led to ongoing accusations that Jim “cheated” particularly during a Monopoly game. On family vacations, Jim enjoyed the role of tour guide. Using a seatbelt buckle as his microphone, he would speak and point out areas of interest. Even in his adult life, Jim loved giving a good “tour.”

Following high school, Jim attended Michigan State University and then Eastern Michigan University where he completed his Bachelor of Science degree in Construction Management. In 1987, he was honored to receive “Outstanding Student” of the Construction Program. While at Eastern Michigan University, he became a member of the Lambda Alpha Chi fraternity where he formed lifelong friendships. He subsequently completed his Master of Science degree in Construction Management in 1993.

Jim met the love of his life, Krystin Kinsey in 1988 and went on to marry her in 1990. Together they have four daughters, Madeline in Grand Rapids, MaryMargaret, Meredith, and MacKenzie all at home. Jim was very pleased to welcome Madeline’s boyfriend, Samuel Penaloza to the family when they became engaged on July 25 this year.

Jim spent his entire working career with Acoustic Ceiling and Partition, Co. (ACP), Ann Arbor. He began there as an estimator in 1987 and worked his way up to Vice President and partner. The ACP friends are a second family to the Weeks Family. Jim also had great admiration for his first boss, Ralph Wickham, and continued to speak highly of him until his last days. Jim had the honor of serving on the Carpenter’s Joint Apprenticeship Training Committee Fund Board as well as the Eastern Michigan University Construction Management Advisory Board for many years.

Jim was a member of St. John the Baptist Catholic in Ypsilanti for more than 20 years. When the family moved to Plymouth in 2018, they became members of Our Lady Of Good Counsel Catholic Church. Jim was a long-time member of the St. John’s Knights of Columbus as well.

While Jim was a hard and conscientious worker, he was a man who deeply loved his family. In addition to his wife, Krystin and their children, he enjoyed his in-laws, Larry and Karon Kinsey, Barry Kinsey, Brandon and Julie Kinsey, David Bruce, and Don Welage. He loved his nieces and nephews, Chloe, Sam, Nick, Carson, and Nora Kinsey, Juliette (Kit) Bruce, Abbigail (Barry) Quinn, Elizabeth, and Nathan Bruce. He has fond memories of his Illinois family James and Joann Barrowman, Mary (Rick) Johnston, and Trudy (Mike) Palm.

Jim was loving, caring, thoughtful, kind, generous to a fault, smart, math and science-minded, funny, introspective, helpful to all those who ever needed him, and hard-working. Jim was a dad from the old-time tv shows with funny wisdom and stern punishment. Jim was always at his girls’ side for everything, showing up to cross country meets, tennis matches, basketball games, choir concerts, and dance recitals even while suffering physically from chemo. He is the dad of daughters who terrified boyfriends at first meetings, but then would shut the door and say, "I like that kid" while shaking his head.

Jim was fiercely competitive, a trait that the 5 women of his family do not share! Jim loved his family with every fiber of his being and if you are his friend, it is guaranteed he loved you too. Jim was a good and faithful servant to the Lord and because of this, he was able to be everything else.

Jim was diagnosed with stage IV non-Hodgkin’s lymphoma in 2014 and overcame it. In February of 2019, he was diagnosed with pancreatic cancer, which soon became stage IV. He pursued every avenue of treatment available to him. He had surgery, nearly constant chemo, and Y90 radiation. He spent much of his time feeling miserable, but never complained. He was perseverant, courageous, and so strong. His oncologist told him last week that she had to beg him to take chemo breaks. He never, ever wanted to stop fighting this horrible disease. He never wanted his children to think he quit, and he didn’t. There was nothing more science could offer to heal Jim of his cancer.

With Jim’s diagnosis it became apparent to him and Krystin that God was asking them to bring people to Him. Jim offered his suffering for others and openly asked for prayers. The family motto became “Trusting God with Reckless Abandon.” Jim surrendered himself always to the Lord’s will. It was his hope that others would draw closer to Jesus through his suffering. Jim was devout to St. Joseph and Blessed Fr. Solanus Casey.

The family kindly would prefer donations in honor of Jim to Spiritus Sanctus Academy, Plymouth (SSA), 10450 Joy Road, Plymouth, MI 48170 in lieu of flowers. Jim was adamant that SSA increased the family’s faith deeply and formed most of their deep friendships in the nearly 20 years they have had children at SSA, with MacKenzie still attending school there.

The family also requests that if you attend the funeral, please wear ORANGE. They would much rather see everyone in Jim’s favorite color of orange than in dark suits! Always remember when you see orange to pray for Jim Weeks. Trusting God with Reckless Abandon!

The Funeral Mass will be livestreamed for those unable to attend in person.

Burial immediately following Mass at St. John the Baptist Cemetery, Ypsilanti
Those who wish to honor the memory of James Arthur Weeks are invited to consider a contribution to Spiritus Sanctus Academy, 10450 Joy Road, Plymouth, MI 48170.

To order memorial trees or send flowers to the family in memory of James Arthur Weeks, please visit our flower store.