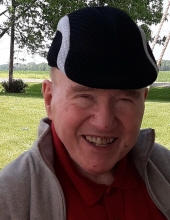 Gerald is the devoted and beloved husband of Diane (née Pace) Wiggins. They have been married for 60 years. He is the loving father of Neil (Denise) Wiggins, Brian (Robyn) Wiggins, Lori (Steve) Jennings and Deborah Gardiner; proud grandfather of Anna (Karl), Nathan, Ashley, Amanda, Rachel, Andrew, Zephan, Matthew, Alex, Jael (Alex) and Christopher and great-grandfather of Xavier. He is pre-deceased by his daughter, Sheila Wiggins, granddaughter, Stephanie Wiggins and his brother, Richard “Buddy” Wiggins.

After Gerald proudly served his country in the United States Army, he enjoyed a longtime career with Burroughs, a major American manufacturer of business equipment. Over the years in his positions at Burroughs, he became familiar with computer technology and the major developments in computing. He was proud of being a part of an organization that was one of the largest producers of mainframe computers in the world.

Friends may visit the Schrader-Howell Funeral Home, 280 South Main Street, Plymouth on Saturday, January 22, 2022 from 11:00 A.M. until the time of the 2:00 P.M. Funeral Service which will be officiated by his son, The Reverend Neil Wiggins.

Those who wish to honor the memory of Gerald N. Wiggins are invited to consider a contribution to a charity of their choice.

Gerald will be laid to rest at Glen Eden Memorial Cemetery in Livonia, Michigan.
To order memorial trees or send flowers to the family in memory of Gerald N. Wiggins, please visit our flower store.