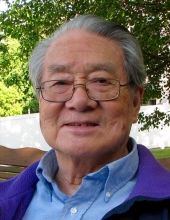 Ernest H. Y. Chu, age 91, of Ann Arbor, Michigan, passed away peacefully in Huron Woods, a memory care facility, on Monday, April 22nd, 2019, following many years of Alzheimer’s. Ernest was born on June 3, 1927 in Haining in the province of Zhejiang, in China to the late Kelvin Chu and Yue Zhen Tang. In addition to his parents, he is preceded in death by the love of his life, “Mommy”, Nien-Si Liu Chu, who passed away, also from Alzheimer’s, last year on June 22, 2018. His sister, Dan Feng, also preceded him in death.

Ernest will be lovingly remembered by his three children, Clara Chu Celebuski and her husband, Joe, of Gurnee, IL, his son, David Chu and his wife Jo Ann, of Huntersville, NC, and his son, Wellington Chu and his wife Wakami, of Taipei, Taiwan. He will be also fondly remembered by his three grandchildren, Rebecca Celebuski and her husband Chang-Ho Yoon, Michael Chu and his wife Meghan, and Jeffrey Chu and his fiancée, Charlotte Rath. His other surviving family members who also remember him, include seven siblings, all of whom live in China, six nephews and nieces and four grandnephews and grandnieces.

Ernest graduated from St. John’s University in Shanghai, China, with a Bachelor of Science in Agriculture. He earned a Master’s of Science and a Ph. D. in Genetics from The University of California, Berkeley, where he met Nien-Si.

Considered “one of the founding fathers of the study of chromosomes”, Professor Chu, held positions at Yale University, Oak Ridge National Laboratory, the University of Tennessee, prior to joining The University of Michigan in Ann Arbor, Michigan, as professor of human genetics in 1972. Dr. Chu retired from Michigan in 1992.

In addition to these full-time positions, Professor Chu was a visiting professor at several universities in the United States, including Stanford University. Internationally, he also worked at the Karolinska Institutet, Stockholm, Sweden and the Sir William Dunn School of Pathology, University of Oxford, England. Other international stints included universities in Canada, Malaysia, and China. His culminating position was being the acting head of the Department of Biology in the Hong Kong University of Science and Technology, where he worked in the University’s founding years, 1990 – 1992.

Perhaps Dr. Chu’s most significant scientific achievement was his pioneering research on mutagenesis in mammalian cells. He received the prestigious Environmental Mutagen Society (EMS) Award for life-time achievement in basic research in 1991. In Dr. George Hoffman’s presentation of this award, he said, “A common thread runs through all of Dr. Chu’s work – creativity, scientific insight, and a direct approach to important scientific problems….. Ernie Chu has had a profound scientific impact on our field. He also distinguished himself as one of the great gentlemen of our field and has won the deep respect and friendship of innumerable colleagues throughout the world.”

Ernest enjoyed traveling, particularly internationally, both for his work as a scientist, and, also, with his beloved wife, Nien-Si, who shared his love for international travel. He visited over 80 countries over his lifetime. He also particularly enjoyed being a host to Chinese dinner parties where Nien-Si cooked traditional Chinese dishes for friends. As a raconteur extraordinaire, he told long and captivating stories, mostly on his international travel.

All are welcome to join Ernest’s family at his gathering of family and friends on Sunday, April 28 from 12:30 p.m. until time of service at 2:00 p.m at the Schrader-Howell Funeral Home, 280 South Main St., Plymouth, Michigan 48170.

The family sends their most heartfelt thanks to the many staff members of Huron Woods, who cared for him so lovingly, as a family member, for the past five years. The family also would like to thank all of the Huron Woods Riverside families who brightened Ernest’s life, when they visited their loved ones, on his Huron Woods floor.
To order memorial trees or send flowers to the family in memory of Ernest Chu, please visit our flower store.