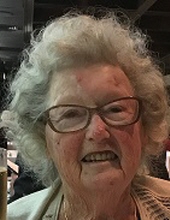 A. Eileen Scott passed away peacefully at her winter home in Florida on Sunday, April 28, 2019 at the age of 92.

Eileen was born on March 27, 1927 the second of three children of Edward S. & Margaret (nee Grant ) Huckabone in Dearborn. She attended Fordson High School and worked for Kresge’s. It was her time at Kresge’s she met her lifelong best friend, Mary Michael. As a young girl, she also met the man who would become her husband, Harry Y. Scott. After Harry returned from his service in the Army, during World War II, the two began dating. In 1947, Eileen married the love of her life. Eileen continued working at Kresge’s until their first child Sherry was born in 1951. In 1954, their second child Michael joined the family. Raising her family then became the center point of her life. She loved spending time with her family over the years. She developed close bonds with her grandchildren, Nicole, Andy, Jessie, and Ryan. In recent years, her family grew to include four great-grandchildren, Aidan, Violette, Liam, and Eleanor. Throughout her life, she was also a devoted dog lover, having a dog with her right up to last year when she lost her beloved, Lola.

After her husband retired from Ford’s, they moved from their home in Garden City, Michigan to spend their summers in Gladwin and winters in Englewood, Florida. Eileen loved to read, especially mysteries and watching TV, lately binge-watching “Game of Thrones.” She was also quite knowledgeable of gems and jewelry. She enjoyed talking and watching the Kentucky Derby each year, attempting to pick the winner and a few times, was quite successful. During her summer’s in Michigan, she enjoyed attending the Highland Games, showing her pride in her Scottish heritage.

But the essence of Eileen’s life was her family. Just recently, two grandchildren and their families visited her in Florida. The family celebrated her 92nd birthday for two weeks. Eileen was a devoted wife, mother, grandmother and a great-grandmother.

Eileen is survived by her children Sherry (George) Young and Michael (Kathy) Scott; Grandchildren Nicole C. Young, Andrew S. (Elizabeth) Young, Ryan Scott and Jessie (Randy) Madsen. Great-grandmother of Violette, Liam and Eleanor Young and Aidan Carr. Eileen is also survived by her brother Grant (Bunny) Huckabone, and nieces and nephews. She was preceded in death by her husband, Harry and sister, Lorraine.

A funeral service will be held on Saturday at the Funeral Home beginning at 11:00 A.M.

In lieu of flowers, memorial contributions may be made in memory of Eileen to the Humane Society of Huron Valley, 3100 Cherry Hill Road, Ann Arbor, MI 48105 and Shriners Hospitals for Children, c/o Donor Relations, 2900 N. Rocky Point Drive, Tampa, FL 33607.

Memorial contribution envelopes will be available at the Funeral Home.


To order memorial trees or send flowers to the family in memory of Eileen Scott, please visit our flower store.