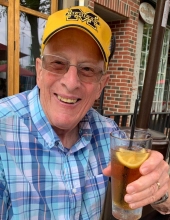 Donald Eugene Jordan, age 78 of Plymouth passed away on November 28, 2021, after a long, hard fought battle with cancer. He was born on April 15, 1943 in Flint, Michigan to his parents, the late Maxine (née Spitler) and Eugene Jordan. Don was also preceded in death by his parents-in-law Torb and Dolores Guenther, and James and Jennie Wellman.

Donald is the beloved and devoted husband of Alice “Ali” (née Wellman) Jordan. They were married on August 25, 1972 at St. John’s Episcopal Church in Plymouth. He is the deeply loved and cherished father of two children – James (Rebecca) Jordan and David (Arlette) Jordan; proud grandfather of Maxwell, Isabella, and Josue. He will be greatly missed by his brother David (Mary Gay) Jordan, his cousins Janet Orsborn, Jim Jordan, Susan Jordan, and Tim Gillespie, his brothers-in-law, Bob (Nola) Wellman and Jack (Pam) Wellman, his sisters-in-law, Amy (Glenn) Goodsmith and Jennifer (Dan) Widina, his nieces and nephews, Scott, Heather, Charley, Bill, Kris, Sean, Jeremy, Brendan, Annie and Richard, and his great nieces and nephews, Hannah, Jordan, Jesse, Joshua, Jacob and Hazel. Don is preceded in death by his brothers-in-law Arthur Wellman, Dan Wellman and Glenn Goodsmith, and his great niece Christianna Patrick.

In 1961, Don graduated from Plymouth High School, but kept connected to his school and classmates, as part of the Class Reunion Committee. In college, Don was an active member of the Fraternity Phi Delta Tau, and graduated from the University of Michigan in 1975, with a Degree in Mechanical Engineering. Don worked at Ford Motor Company for over 30 years, during which time he earned his Professional Engineering Certification.

When it came to his family, the most important thing to Don was spending time with them. He took them on many vacations, including camping trips up North, Cooperstown, Myrtle Beach, Toronto and Key West, but his favorite time was the annual trip to Cancun. As a husband, he was deeply devoted to Ali and they took good care of each other during their 49 years of marriage. As a father and grandfather, he was strong and comforting, very involved in their activities, and always in the stands cheering them on. He promoted and instilled these important values in his sons.
Don’s wide range of interests included being a pilot, a racecar driver, the soap box derby, and an avid runner. These outdoor activities enriched his life and that of his family and friends, created long-lasting memories and strengthened friendships and family bonds. Don was also a teacher at Delta College and a Scout Leader.

He had a great love and passion for music. Music can make us feel at peace or make us want to dance. Don understood the language of music and how it communicates so much to anyone who loves and appreciates it. He was a band member at his church and a proud member of the Plymouth Community Band. He played several instruments including the euphonium and also taught accordion lessons.

Don always wanted to help others so when his friend Lou asked if he would like to volunteer at Ascension Hospital, he of course said yes and enjoyed many years taking care of others. Again, with being a wonderful husband, family man, and active member of the community, his example of love for his family and his community will forever be a reminder to his children, his grandchildren and all who knew him. He is deeply loved and will be greatly missed.

For those who cannot attend and wish to view the Funeral Service in a safe environment, the funeral service will be live streamed.

In lieu of flowers, Don requested that donations be made to the Plymouth Community Band. - www.plymouthcommunityband.org/support/
To order memorial trees or send flowers to the family in memory of Donald Eugene Jordan, please visit our flower store.