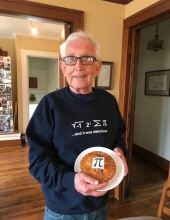 On the morning of June 9, 2020, a man who was a great husband, father, grandfather, educator and civic leader left his final mark. Extraordinarily gifted at mathematics at a young age -- tutoring high school students while in elementary school -- Dennis William Bila lived a life filled with adventure; amazing personal, professional and civic engagement accomplishments; and had an influence on people and places spanning generations.

Born in Owosso, MI, Dennis grew up on a farm in Oakley, MI, and would go on to earn degrees from Central Michigan University and Wayne State University in education and mathematics. Author of numerous books on advanced mathematics, Dennis served as a professor at Washtenaw Community College for 50 years. While at WCC, Dennis was president of the teacher’s union for many years and his role in the growth of the institution was enormous. Loved by his students – he was repeatedly voted best teacher at WCC – he was equally loved and admired by the numerous students he tutored for free throughout the Plymouth/Canton community and beyond.

Dennis was an active member of the City of Plymouth community serving as mayor, city commissioner, and on numerous committees and boards throughout the years. A voracious reader of books, newspapers and journals, Dennis loved history and enjoyed discussing world events both past and present. An avid runner, he was a fixture in the Plymouth’s Father’s Day run with his children ands grandchildren and could be found doing his daily run on the track behind Central Middle School every morning. His love of adventure and learning was well documented as an airplane pilot, a man who sky dived at age 75, a hunter and lover of nature, his love of classical music and appreciation for the opera, and his quest to always challenge himself to find something new and exciting to engage in.

His true joy was derived from time with his family and watching his grandchildren during their athletic competitions, musical performances, and other endeavors. Dennis empowered people to believe in themselves, encouraged them to believe they could succeed and in doing so would make an impact on the world. His kindness, humility, acceptance of others and sense of humor made him universally loved.

Born April 13, 1941, to Glee and William Bila, those acknowledging his larger than life presence include Sally, his wife of 60 years and the love of his life; son Dennis; daughter Kallie and son in-law Jim Michels; grandchildren Harrison (wife Parker) and Madeline Michels; Michael, Sam and Katie Bila; brother Gayle (and wife Sue); sister in-law Elaine (brother Ron Bila, deceased); sister in-law Helen and husband Jack Pumford; nieces and nephews and friends spanning the country. A private burial will take place in his hometown, and in lieu of flowers the family asks that any donations be made to: American Legion Smith Hoover Post 281, P.O. Box 436, Harbor Springs, MI 49740, where Dennis spent many happy moments with his son. Dennis Bila lived and loved life to its fullest every day and encouraged others to do the same -- this is his ultimate mark on our world.
To order memorial trees or send flowers to the family in memory of Dennis William Bila, please visit our flower store.