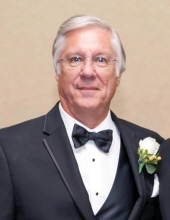 David M. Gillen, age 65, passed away at home on June 2nd, 2021, after a short battle with pancreatic cancer.

He was preceded in death by his father, Gerald R. Gillen.

Dave spent his career in the retail food industry, following in the footsteps of his grandfather, father and uncle. He began as a bagger in high school and worked his way to regional manager for a major spice company. He also owned his own brokerage / distributorship for many years.

Dave was an avid Star Trek and Star Wars fan and liked discussing the merits of the movies with his sons. He enjoyed music from many different genres – from barbershop quartet to classical and almost everything in between, but most special to him was whatever his son was singing with his band on bar night.

Dave enjoyed the outdoors, sports of all kinds – especially watching his kids’ events, planting flowers in his garden, relaxing on the deck with a cold beer and vacations at Ludington State Park. Most of all, Dave enjoyed spoiling his wife and spending time with his family. He will be dearly missed.

For those who are unable to attend, the funeral service will be livestreamed


In lieu of flowers the family would appreciate considering a donation in Dave's honor to fight pancreatic cancer at pancan.org or envelopes will be available at the funeral home.
To order memorial trees or send flowers to the family in memory of David Michael Gillen, please visit our flower store.