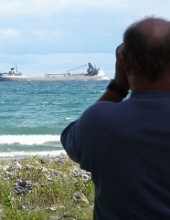 Curt was born on May 13th 1947 in Highland Park, Michigan. He proudly served in the U.S Army as an MP on Okinawa. Returning to the states, Curt became a Police Officer for the Wolverine Lake P.D. and then the City of Plymouth P.D. where he retired from in 1997 after 28 years of service. At the time of his passing, Curt had been employed by Blackwell Ford for the past 9 years.

Visitation will be Saturday, November 23, from 12 PM – 3 PM at the Schrader-Howell Funeral Home, 280 South Main St. Plymouth, MI 48170. The funeral service will begin immediately following the visitation at 3 PM. In lieu of flowers, memorial donations may be made to the family.
To order memorial trees or send flowers to the family in memory of Curtis M. Hill, please visit our flower store.