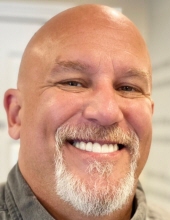 Bernard was employed as Director of Quality at Fubang, a leather manufacturing company.

Bernard’s family tells us he was a true follower of Jesus Christ. His Christ-centered life led him each day to be devoted to getting a step closer to the Lord. In all of his daily interactions with his wife, Vickie, his family, friends, co-workers, members of his church family and even strangers, they could immediately feel his warmth, kindness and sense of peace. He truly mirrored that of Jesus because of the relationship he had with Him. He lived his life believing that wherever you are on this earth, there are many opportunities to share the good news of the Lord - and Bernard did that daily in just his words and actions.

In true keeping of the person all who knew Bernard to be, he was an active member of Edge Venture Men’s Ministry – a men’s Christian organization who share the same goal to be the man God wants them to be - men who honor Jesus and seek Wisdom from The Father, strength from The Son, power through The Holy Spirit and peace with others.

Family meant everything to Bernard and there was nothing he wouldn’t do to see that his family was happy. His love was strong and unconditional. He loved being a husband to Vickie, his “beautiful princess”. He adored his children and was proud of the adults they had become. As a grandfather, he delighted in every photo of each grandchild watching as they grew up strong, healthy and godly. His brothers, Tommye, Joe and Scott will miss him dearly and their shared family bonds and history together. Bernard was a husband, father, grandfather, brother and friend. He was loved by so many who will cherish their many memories of him forever.

For those who cannot attend and wish to view the Funeral Service in a safe environment, the funeral service will be live streamed.