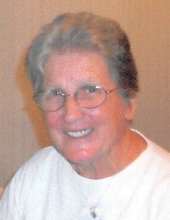 Barbara Graham, age 85 of Plymouth was called home on Sunday, May 17, 2020 in the arms of her daughter Kristy

Barbara was a very hard worker and had many loves and passions. Barbara not only did secretarial work, she also worked as a Cashier for Meijer for many years and after retiring, she enjoyed working at the Plymouth Orchard .

In her earlier years, Barbara was on a softball league and a bowling league which she continued to bowl on a league in Canton for many years with the Cantonettes. Barbara and her husband, Lloyd loved shooting guns and competing against each other at the gun range they belonged to. She loved the outdoors and enjoyed gardening, hunting, and golf, but especially loved fishing and spending time at their trailer in Indian River where she would visit the Cross in the Woods every chance she could.

Barbara and her husband, Lloyd enjoyed decorating both inside and outside of their home for every holiday. Barbara took great pride in making and decorating cakes and cookies for every special occasion and holiday.

Barbara was involved with the PTA and the Right to Life, but her true love and passion was the Board of Education which she was not only very active in, but a member of the Board for the Detroit Public Schools and the Plymouth/Canton Schools for over 30 years.


Friends may visit the Schrader-Howell Funeral Home, 280 South Main Street on Thursday, May 28th from 12:00 P.M. until 9:00 P.M. A Funeral Mass will be celebrated on Friday, May 29th beginning at 12:00 P.M. at Sweetest Heart of Mary Catholic Church, 4440 Russell Street, Detroit, Michigan.

The Funeral Mass will be live-streamed from the Church on the Schrader-Howell Funeral Home website.

Please be advised that in observance of the governmental order from the State of Michigan, when in attendance at the visitation and funeral, we kindly ask for the safety and well-being of the families we serve and for your health, that everyone practice social distancing and consideration for other guests in attendance.

Barbara will be laid to rest next to her beloved husband, Lloyd at Parkview Memorial Cemetery in Livonia.

To order memorial trees or send flowers to the family in memory of Barbara Graham, please visit our flower store.