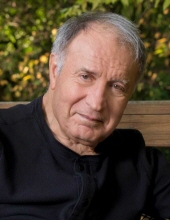 After graduating from St. Mary’s of Redford, Tony went on to the University of Detroit where he earned a Bachelor’s of Aeronautical Engineering degree and became a member of Phi Kappa Theta. He enlisted in the USMC Reserves, went to Officer Candidate School, was stationed at Camp Lejeune, and became a Platoon leader, before his honorable discharge. He followed that with the completion of a Master of Science in Engineering Mechanics degree from St. Louis University. After graduate school, he went to work for McDonnell-Douglas, where he would work as an aeronautical engineer on military, and NASA projects, including the space station Skylab, and Mars Lander. Tony devoted the rest of his professional career to Ford Motor Company. When Tony wasn’t working, he enjoyed reading, designing, building and flying model airplanes, writing short stories, fly fishing, flying sail planes, hiking nature preserves with Sue, vacationing on the Great Lakes, and volunteering. One important cause to Tony, was volunteering at St. Kenneth Church, helping with the homeless. Tony was a faithful member of Our Lady of Good Counsel Catholic Church, and his relationship with God was of exceptional importance, which gave him strength. Tony was a tremendous father, and loving husband, who greatly enjoyed spending time with his family. He was unconditionally deeply loved, admired by all, and whose profound loss is irreplaceably felt.

Memorial donations may be made to the Capuchin Soup Kitchen, Parkinson’s Foundation, and Coalition on Temporary Shelter (COTS).

To order memorial trees or send flowers to the family in memory of Anthony "Tony" Petricca, please visit our flower store.